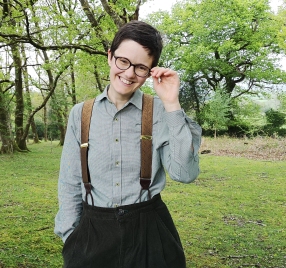 Katie Green grew up in London suburbs, studied and lived in Bristol for 10 years before settling in Devon, close to Dartmoor National Park. After completing a degree in Biology, Katie studied Sequential Illustration, graduating with first class honours in 2009.

Katie’s graphic memoir, Lighter Than My Shadow, began as a degree project and was published by Jonathan Cape in 2013.

Since that first publication, Katie has worked on zines, short comics and illustrations for select clients as well as self-directed creative work. Katie’s work has been featured in several exhibitions, and Katie and gives workshops and presentations around the UK and overseas.

2018 Can Graphic Design Save Your Life? The Wellcome Collection, London
2017 The Inking Woman, The Cartoon Museum, London
2014 Comics Unmasked, The British Library, London

2014 The Courage To Be Me: chapter contribution in resource book for sexual abuse survivors by Nina Burrowes

2016 and 2017 Workshops with English Literature students at Cardiff University

2014 Workshops and lectures with students, staff and patients at Penn State Medical School

2014 Presentation at Student Health Assocation Conference with Dr Will Devlin

2012 Laydeez Do Comics Bristol, presenting work-in-progress from Lighter Than My Shadow

2011 Visualizing the Stigma of Illness, Comics Forum conference at Leeds Art Gallery, presenting work-in-progress from Lighter Than My Shadow

2011 Laydeez Do Comics London (June meeting), presenting work-in-progress from Lighter Than My Shadow